After more than a year of hard work, Kentucky Heartwood and our allies with the Coalition to Preserve Land Between the Lakes succeeded in convincing the Forest Service to withdraw the Pisgah Bay Project and more than 4,000 acres of commercial logging!

Background on the Pisgah Bay Project 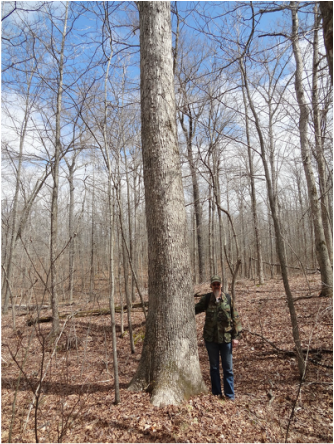 Kentucky Heartwood worked with community members and local political leadership from both sides of the aisle to halt a 4,000 acre logging project in Pisgah Bay, an area of beautiful oak-hickory forests and emerging old-growth characteristics in Land Between the Lakes (LBL) in far western Kentucky. This isolated forest peninsula with a complex cultural history, bound by the dammed waters of the Cumberland and Tennessee rivers, is a vital reserve for a wide range of species and natural communities in an otherwise agricultural and developed landscape.

Along with logging, the Forest Service proposed 5,000 acres of prescribed fire and an annual 600 acres of herbicide treatments on both non-native invasive plants and native trees considered “undesirable” by the Forest Service. All of this is immediately adjacent to the recently implemented Demumbers Creek project, which included 1,850 acres of commercial logging. In addition, the Forest Service already maintains about 20,000 acres of openlands as hay fields, powerline right-of-ways, commercial cropland leases, and two designated “Oak Grassland Demonstration Areas.”

In their attempt to justify the project, the Forest Service took an idea with merit – that some plants and animals benefit from fire and canopy disturbance – to the extreme in an effort to convert nearly the entirety of LBL into a heavily disturbed landscape through commercial logging and an aggressive prescribed fire program. While some species do benefit from the large areas of briars, scrub, and charred trees that are created by fire, others species, like the rapidly declining Cerulean warbler, need old, mature, and unfragmented forest habitat to survive.

There were public meetings, both held by locals and the USFS where hundreds of people showed up. The local Jeep Club even hosted a ride through areas that had been previously  logged, with nearly 100 vehicles in the caravan.  Local Republican leaders took to the megaphone to rally folks against the logging. It remains the best example in Kentucky forest activism of community participation making a dramatic difference.

The Coalition to Preserve LBL emerged from the organizing effort. It included former Between the Rivers residents, local government officials, LBL Jeep Club, Kentucky Heartwood, Tennessee Heartwood,, and others. Many thanks to Judge Executive Wade White for leading the coalition.

Thank you for this opportunity to comment on the Pisgah Bay Project. As a member of the public for whom these public lands are managed, I have several concerns with the project as proposed. To address these concerns, I ask that the Forest Service include in the Environmental Assessment and approve a Citizens Alternative that contains the following:

1. No commercial logging will be used in the project area, with tree cutting limited to hazard trees adjacent to trails, roads, campsites, and other developed recreation areas. The Forest Service will facilitate the development of mature, contiguous forest cover with natural canopy disturbance in this part of LBL.

2. Prescribed fire will be eliminated or restricted to dry upland sites and the maintenance of hayfields and other maintained openlands, including known locations of Prices potato bean. Valleys and creek bottoms will be allowed to develop into riparian and mesic forest communities that are currently underrepresented in the project area.

3. No roads will be added to the road system, as the Forest Service is already unable to maintain existing roads to established and acceptable standards. The Forest Service should address the unachieved Area Plan goals of both reducing unneeded roads and maintaining cemetery access by decommissioning half of Forest Road 305, while allocating adequate resources toward keeping the remainder passable for cemetery access. All roads, and Forest Road 306 in particular, will be maintained to appropriate standards to address sediment and resource damage or else be decommissioned.

4. Herbicides will only be used on non-native invasive species, and where manual, mechanical, or other non-chemical means are demonstrated to be prohibitive.

5. The 30-acre, subsidized commercial cropland near the mouth of Pisgah Creek will be restored to native riparian and mesic forest types. Other maintained openings will be converted to native grasses and forbs.

Thank you for considering these comments.