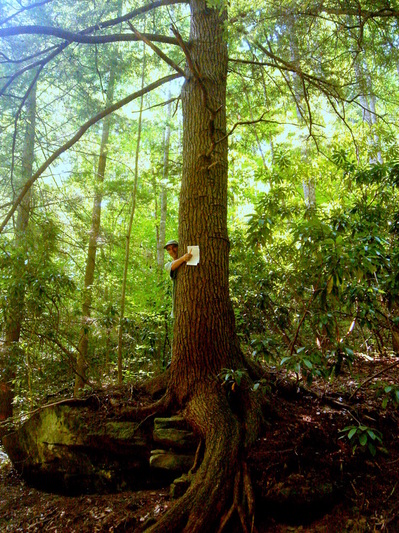 Robinson Forest is the largest block of intact, native forest in the eastern Kentucky coal fields.  It is surrounded almost entirely by strip mines, making it truly an island of functioning native forest with some of the cleanest running streams in this part of Kentucky.  It is managed by the University of Kentucky which has chosen to whittle away this special place, first with strip mining and then with 800 acres of clearcut logging designed to see what happens to clean Appalachian streams when you log right up to the water's edge.

The University of Kentucky, as of 2002, had mined or leased for mining 3,885 acres of the 14,786 acres of forest left in the University's trust. UK did try to mine the main, 10,259 acre block of forest but met with stiff opposition, resulting in the lands being labeled "unsuitable for mining."

With scheduled timber rotations, coal underground, and a history wanton disregard for this unique public asset by the University of Kentucky Board of Trustees, Robinson Forest remains threatened.

Below you will find a number of documents we have developed and archived over the years, documenting the constant pressure and public outcry to protect Robinson Forest.

Written in 2007, this “Green Paper” was developed for students and faculty at the University of Kentucky—and for the citizens of Kentucky—by members of UK Greenthumb, Kentucky Heartwood, Kentucky Resources Council, Kentucky Waterways Alliance, Kentucky River Watershed Watch, Kentuckians for the Commonwealth, Sierra Club, and other local organizations and individuals. The paper’s purpose is to provide information and debate regarding current questions about Robinson Forest—the 14,786-acre forest owned the University of Kentucky and dedicated to research, demonstration, and education. This paper focuses on Robinson Forest’s 10,000-acre main tract where the majority of its forest research, demonstration, and teaching occur. It has been prompted by UK’s Streamside Management Zone (SMZ) study, which was quietly proposed during 2004-2006 but only widely discussed after July 2007. In light of growing opposition to the research project, the SMZ study has been recently defended by a “White Paper” from UK’s Dept. of Forestry (Sep. 25th, 2007). This “Green Paper” serves as a formalized challenge to the SMZ proposal, and as such, voices collective concerns regarding the harmful impacts of the study.

To see one of the adjacent, active strip mines, click here.

These pictures were taken on a trip up Cole's Fork in late April 2009. We traveled by bike on a gravel road that crisscrossed the creek for 7 miles before we started to ascend to the ridgeline. We climbed until we arrived in a splendid forest of chestnut oak. From here we gained a vantage point on the edge of the Cole's Fork watershed. As we looked down onto Jake's Branch we saw where the mining had taken a good part of the forest to the south of Robinson Forest. A road along the border of Robinson told us that soon this portion of the mountain would be removed. We reflected on the scene and retreated back into the headwaters of Cole's Fork. We traveled just over 20 miles that day through the Cole's Fork watershed. As we returned home that evening we realized how little stood between the mines and the mountain valley that is so seldom visited.

In August of 2008 I traveled to visit the headwaters of Clemons Fork in Robinson Forest. My objective was to see the extent of the logging from the streamside management zone study underway. I used a dirt trail on mined land that followed the northern boundary of Robinson to travel to the headwaters of the streams that were to be logged. Not even half of the logging was completed. As I traveled from mined land to logged over it became apparent that Robinson is one of the most endangered forests in this part of the world. An army of machines waiting on its flanks to dig into its depths. Much of the forest in the unlogged photos has been removed by now. As an island of forest in the eastern coalfields, it seems logical that Robinson should be preserved as a reference forest, a template for future generations who ask the question of how to restore the mountains to their former glory. As a graduate of this institution, I call upon the University of Kentucky to keep intact the timber and the mountains from which they spring forth.  Great foresight is required to see the full potential for this 10,000 acres of native forest in the eastern coalfields. I can assure you that future Kentuckians will look upon this Forest as a natural treasure.

To learn about the mining expansion just south of Robinson Forest, read our alert here.

To see the permit request, download the files below.